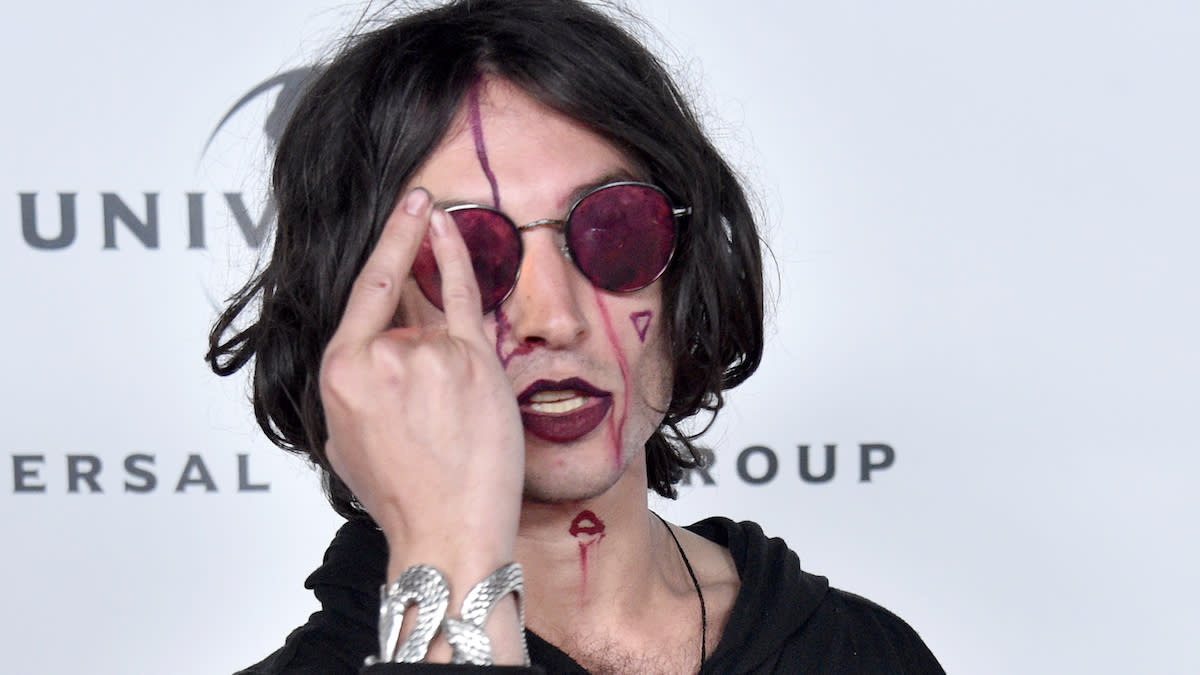 An increasingly paranoid Ezra Miller has taken to wearing bulletproof body armor and carrying at least one gun almost everywhere they go, according to a new report from Insider that traces a timeline of Miller’s activities and finds a disturbing pattern: They establish a home base, financially support artists and young women, and then attempt to control and manipulate their sexual partners, causing one of his alleged victims to compare the practice to a cult.

Miller allegedly believes that they are being followed by the FBI and Ku Klux Klan, the former because multiple parents and young people have accused the actor of grooming minors, and the latter because Miller released a video earlier this year demanding that members of the KKK kill themselves.

Tokata Iron Eyes, an 18-year-old traveling with Miller whose parents have sought a restraining order against the star, called the body armor “a fashionable safety measure in response to actual attacks and received death threats.”

Miller met Tokata in 2016 when she was a 12-year-old activist opposing the Dakota Access Pipeline. Miller flew Tokata to different places, including London for the premiere of his movie Fantastic Beasts and Where to Find Them, and when she was 18, family friends saw the two of them having sex. Miller also reportedly asked to share a bed with Tokata when she was only 14, though a Tribal elder claims to have stopped them, and earlier this year her parents suspected the flash star of controlling her daughter with “violence, intimidation, threat of violence, fear, paranoia, delusions, and drugs.”

This was not an isolated incident. In 2020, the world first learned of Miller’s increasingly erratic behavior when a video showed them choking a woman in Iceland. But their time in Iceland was more eventful — and disquieting — than even that video would suggest.

During the two months Miller spent in Iceland, rumors spread among locals that the actor was running a cult out of an AirBnB. Permanent residents described him as an aggressive person with a revolting smell who rarely changed out of their clothes. Three people recalled Miller walking barefoot through Reykjavík, noting long, unclipped toenails and what may have been an infected gash on their foot.

The AirBnB, a house in the Reykjavík suburb of Kópavogur, was described by one visitor as a “commune” with beds laid out on the floor. Miller collected a community of artists, ex-pats, and beautiful young women who were said to hang on his every word. “I felt like everyone was hypnotized,” the visitor said.

Miller led group meditations and claimed to possess supernatural powers. He also paid for food, lodging, and marijuana, and once handed a musician the equivalent of $1,500 for his birthday. But Miller would become enraged at dissent.

“Nobody ever was kind of allowed to disagree with them,” said a young woman who’d known Miller in Iceland and had a brief sexual relationship with them when she was 18. “Their reality painted everybody else’s reality. There was no room for anyone else’s opinion or feelings.”

One person recalled Miller cornering them in the house, saying, “You don’t like my hospitality,” and claiming to be able to read her mind. The actor also flew into a rage when she attempted to use her phone. She said she snuck away and texted her family to pick her up. “I was a bit traumatized for a while,” she recalled. “It was one of the weirdest days I’ve ever experienced.”

“At one moment they would look me in the eye and be like, ‘I love you,’ and be this really nice, beautiful person,” she said. But right afterward, they would “tell me that I was fucking disgusting.” She added, “There was a lot of psychological abuse.”

“Ezra was super manipulative,” she explained. “They kind of had us all under their fingers. They were able to twist and pull everything that I thought I knew about the world.” After six days, Miller left town, and the woman returned to her apartment, where her roommate gave her literature on cults. Reading about leaders who promised spiritual or material wealth while simultaneously cutting people off from family, she realized it was “the exact same thing that I was in with Ezra, and that really scared me.”

“It was only six days, but it honestly felt way, way longer,” she said. “I remember feeling, like, ‘Wow, I don’t know how I’m going to recover from this.’”

Miller was back in the headlines in 2022 during a tumultuous stay in Hawaii. They were arrested for disorderly conduct at a karaoke bar, and in a separate, unrelated incident, charged with second-degree assault after becoming enraged at a house party and throwing a chair at a woman who asked them to leave. During that time, they also recruited at least one more long-term companion: a mother of three, who along with her children is currently living in his permanent home in Vermont.

The woman has claimed that Miller is protecting her from an abusive relationship. But the father has been publicly agitating to get his children back, and visitors to the Vermont estate noted rampant drug use and unsecured guns, alleging an environment unsuitable for young kids. One child, a one-year-old, allegedly found a live bullet on the ground and put it in her mouth. In another instance, a spectator said that Miller not only blew marijuana smoke in the direction of a baby, but also wafted clouds to get it closer to the infant’s face.

It’s unclear how many people are living at the Vermont home, but Tokata is at least a semi-permanent resident, and earlier this year suffered an LSD overdose that required outside attention some four days after her trip began. And Miller seems to have been recruiting new tenants. In February of this year he visited Greenfield, Massachusetts, and took an inappropriate interest in a then-11-year-old nonbinary child. Reportedly, Miller told the mother, “I’ve talked extensively with your child, and they have a lot of power to them. At one point, you’re going to realize that you don’t have any control over them anymore. They’re an elevated being, and they would be lucky to have someone like me guide them.” Miller also reportedly screamed at the woman until she started crying.

Miller then invited the child to come live with them in Vermont, promising to buy them horses whatever else they might like. “They automatically were just weirdly drawn to me and kept talking about how they love my outfit and love my style, and kept going on and on about how it was great,” the child said. “It was really uncomfortable. I was really nervous. I was scared to be around them after he’d yelled at my mother and she was crying.”

The child was granted a protective order against Miller in June.

Miller is set to star in the upcoming comic book blockbuster flash, Though reports have suggested that studio executives are exploring options to do away with the troubled star. Meanwhile, longtime friends just want Miller to seek help. “People in Ezra’s life are really grieving the person they’ve lost,” one longtime family friend said. “Because I don’t think that person is coming back.”

Subscribe to Consequence’s email digest and get the latest breaking news in music, film, and television, tour updates, access to exclusive giveaways, and more straight to your inbox.