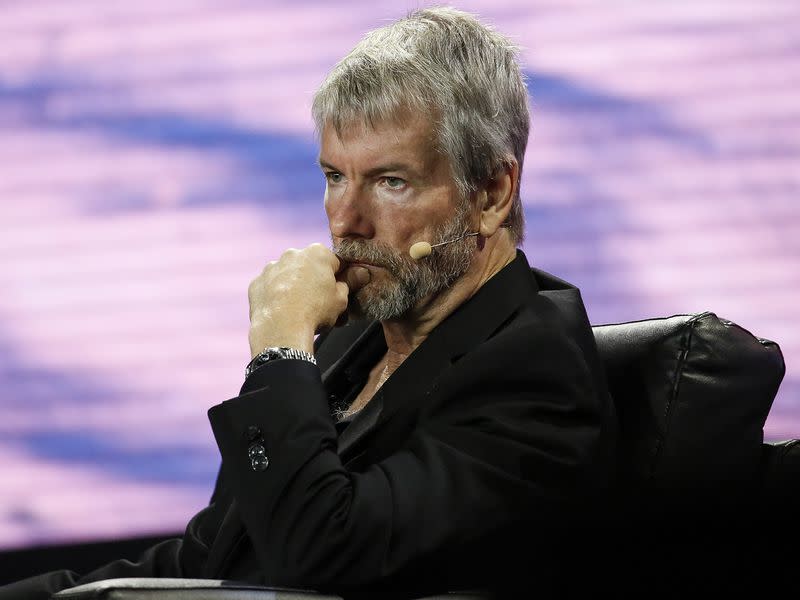 Michael Saylor is down about a billion dollars on his bitcoin (BTC) bet and just stepped down as CEO at MicroStrategy (MSTR), the software company he founded in the 1980s.

Being in a tight spot is familiar territory for the 57-year-old Saylor. After the dot-com bubble burst in March 2000, Jim Cramer, the CNBC host, pointed to the collapse of MicroStrategy as a catalyst. The stock had tumbled 62% in a single day after MicroStrategy announced accounting mistakes, erasing $6 billion from Saylor’s wealth and marking a prominent end to the high-flying days of the early Internet. Later that year, the US Securities and Exchange Commission brought, and then settled, accounting charges against MicroStrategy, Saylor, and other company executives.

Saylor and MicroStrategy then spent two decades mostly under Wall Street’s radar. Not that he was suffering. MicroStrategy kept plugging away, developing software for businesses. Saylor lived in a Miami Beach, Fla., mansion that looks like a Spanish colonial palace. A recent visit by a CoinDesk reporter revealed painted cherubs on the foyer ceiling, gold paneling and crimson-red wall paper in the dining room, a stage beyond the office library stocked with guitars, drums and whatever else a band might need, and a portrait of Saylor styled like an old English sailor – with laser eyes. A yacht was floating out back, where a crew lived full-time so Saylor could travel whenever he wanted.

What brought Saylor back to center stage was bitcoin. His fear of inflation drove him in 2020 to start investing MicroStrategy’s cash in the original cryptocurrency. The company’s cash flows started getting routed to bitcoin. He lined Wall Street bankers’ pockets by selling debt to raise money to buy bitcoin. In the process, he audaciously turned his sleepy software company into a bitcoin vault. In all, MicroStrategy has spent about $4 billion on digital assets. MicroStrategy’s stock became a proxy for holding bitcoin. The stock price moves up and down in lockstep with bitcoin’s movements.

He became something like a bitcoin preacher spouting religiously fervent praise. His grandiose predictions included one that bitcoin will eventually be worth $100 trillion, roughly what all stocks in the world are collectively worth now.

“After scientifically studying everything on Earth, I’ve concluded bitcoin is the best inflation hedge,” he told CoinDesk during a November interview at the Miami Beach mansion. “We buy bitcoin as fast as we can with whatever money we find lying around.” His advice as bitcoin was near its record high? “If you have bitcoin, don’t sell it. If you don’t have bitcoin, buy it. And if your bitcoin is moving around, wait.”

Fast forward to today. MicroStrategy’s stock has lost about two-thirds of its value since peaking last year, dragged down by the current bitcoin bear market. This week, Saylor handed the CEO title to Phong Le, who had been MicroStrategy’s president, and shifted into an executive chairman role, pledging to put all his focus on bitcoin investing. Le now runs the legacy software business.

Saylor wasn’t immediately available for an interview for this story.

So who is Michael Saylor?

Born in Lincoln, Neb., into a military family, Saylor grew up around bases. That included Wright-Patterson Air Force Base near Dayton, Ohio. He attended the Massachusetts Institute of Technology on an Air Force scholarship and became an Air Force second lieutenant.

He launched MicroStrategy in his early 20s after convincing his employer, DuPont (DD), to give him $100,000 and free office space and computer equipment, Saylor told Charlie Rose during an interview in February 2000. Saylor’s quirkiness was visible back then, offering a glimpse of what was to come with bitcoin.

But he immediately noted the serious potential downsides of technology, too, about a month before his stock plunged. “If the software crashes, the civilization comes to a grinding halt in the same way that if you shut down air traffic control at a major airport, traffic will come to a grinding halt,” Saylor told Rose, adding, “And that’s what’s exciting about technology.”

Darin Feinstein, co-founder of the Bitcoin Mining Council, knows Saylor because the MicroStrategy executive helped form the advocacy group in May 2021.

“He is a genius entrepreneur,” Feinstein said in an interview after Saylor’s job change. “You say something and he already knows what you’re going to say,” Feinstein said, when asked how Saylor is during meetings. “He operates on a completely different level.”

After he stepped down as MicroStrategy CEO, some observers initially speculated the bitcoin buying was over. They quickly learned that’s not the case. Saylor intends to go even deeper now that he’s executive chairman.

“In my next job, I intend to focus more on bitcoin,” Saylor tweeted early Wednesday.